Long Range Plans Our Vision Wellness Board of Directors

It’s been a while since we’ve added an update for our friends. Much of the delay has resulted from trying to find a more consistent way of getting internet coverage out here in this remote location. We now have that, and can devote ourselves to managing our website better now. 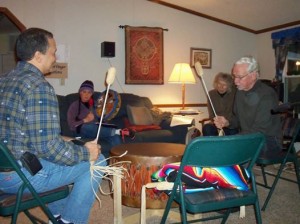 Beginning in January, we began hosting a new and exciting group for Christian leaders from the Virginia tribes.  Even though Carla and I are not native people, we have invested the last twenty years of our lives overcoming the reputation of most white people among natives–which has involved some 400 years of hurt and heartache.  Mostly, it’s been us white people doing the hurting, and the Virginia tribes doing the heart-aching.  Overcoming this history has been a calling God gave us in the mid-90’s, and it’s taken all this time to see some real fruit.  After being invited to a meeting with Cheryl Bear (from the Carrier Nation in Canada) and her husband Randy last November, we were asked to host this monthly gathering for Christian leaders from  the Virginia tribes. The purpose is two-fold: to provide a safe environment where people can recover from hurts; and to develop the unique sound of Native Christian worship.  –And, of course, to have a good time in the process, which includes breaking bread together.

The picture at left shows Kelly and Troy Adkins, dancers in the Chickahominy tribe (and close personal friends) with Carla and me.  Troy and I are pounding the “Abba” drum, which is what we call a pow-wow drum that is reserved for the worship of God.  Our first gatherings were sparse, but by this week, we had some 25 people at our gathering, with new people showing up every week.  They come from 50, 60 miles around, so this meeting apparently means a lot to them.  Our role is not to provide leadership, but to host them as they provide leadership.  Carla and I are learning a lot, as we expose ourselves to another culture different from the one we grew up in.  Now our main concern will be: where do we find room for all these people if we keep expanding the size of the group at our present rate.

My relationship with George Otis, jr. has continued to grow, as the Holy Spirit keeps opening doors.  George, the creator of the Transformations video series, has been expanding beyond just producing videos of transformational revivals by the power of God.  He has been tracking the principles common to all these moves of God, and then finding leaders who believe in those principles.  Such leaders are called “Transformation Partners.”  Three months ago, George invited me to be a transformation partner, and he also invited me to write articles for  his new website, www.thehearthside.org.  This new website is co-hosted by George at The Sentinel Group, by Intercessors for America and by The Global Day of Prayer in Johannesburg, all working together.  It is a good example of how God is putting “ligaments” among ministries that were formerly separate.  He is, with greater urgency, teaching us all how to work and pray together as the Body of Christ. 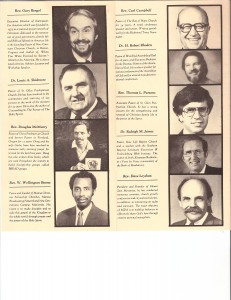 There are many excellent articles on that website, though at present only the “Blog” part is operational. Click on the fire in the middle of the screen, and it will take you to the current blog article, with the names of the various blog writers in the right-hand column.  You will see my name there, but many of the other names are of leaders who are just now involved in some very exciting moves of God, and you will be interested what they have to say about transformation.   Go to my blog, and you will find the story of my initial experience seeing God answer prayer by breaking up the Rajneeshpuram community in Oregon some 30 years ago.  My next article, soon to be published, will narrate our experience seeing a dramatic drop in the murder rate in Richmond in 1986.  After that, I will publish my amazing discoveries about how the gospel first spread among the tribes of the Pacific Northwest in the early 19th century.  It was this experience that first put a passion in my heart toward First Nations people (Native Americans).

The picture at right is from my article about the murder rate, soon to be published.  We invited Gary Bergel from Intercessors for America to join us February 9-11, 1986, to address the high murder rate in Richmond. Some six- to eight-hundred intercessors from all over Richmond were gathered to intercede for our city. They were from every racial group, and represented every conceivable denomination in the city. We prayed in total agreement against the “spirit of murder” in Richmond. Then, as we continued in prayer after that, the news came out a month later (on March 11)–there had been not a single murder in Richmond for exactly one month, and no one could understand the gap in the murders.  A year later, the murders had declined dramatically, according to the news articles that tracked those declines.  The full story will appear soon on thehearthside.org.

Those of you who haven’t heard our story about the Rajneeshpuram community would be interested in that, too. It’s backed up by pictures and news snippets from the 25-year retrospective The Oregonian did about the cult, with interviews of community participants and the investigations of the authorities. (They discovered, for instance, that there was a plot to fly an airplane into the county courthouse in The Dalles. Apparently, the authorities discovered the plot before it could mature.)  Today, the Rancho Rajneesh has been turned into the largest Young Life retreat center in the world.  That’s transformation!

I have felt all along that one major reason for our website was to make available teachings on the life of Prayer.  “Glory Through Time,” my first series,  is now complete. It attempts to show the track record of prayer, or rather, the track record of God, when people pray together in Jesus’ name.  Because Jesus is the King, I prefer to call these episodes Kingdom advance.  Today George Otis is calling them “transformational revivals,” and it may be we need a good scientific term like that, such as George suggests.  However, I prefer the good old-fashioned Biblical name, “the Kingdom of God.”  The “Glory Through Time” series looks at this aspect of our history for the last 2000 years.  I had often heard people (like Derek Prince, for instance) say that prayer is the hidden mainspring of history. But I never had any real data to back that up.  Now I do, and you will too, if you review the “Glory Through Time” series.

My next series will be an “End-time Promise” series that tracks where all this glory through time will end up.  I believe that the Back To Jerusalem movement in China marks the last great push to complete the Great Commission. But what happens then?  Some of the great leaders of the Chinese Church, not to mention many others around the world, are calling attention to the approaching fulfillment of end-time prophecy today.  As for me, I have been increasingly influenced by my recent friendships with several Messianic Jews (like Dr. Dan Juster), who have changed my viewpoint on a whole variety of issues.  Especially the End Times. As the Church rejects “replacement theology” and recognizes that we Gentiles are still grafted into Israel just as Paul said in Romans 9-11, that awareness must change our perception of the End Times.

In any case, it is important for us to see that God has already ordained a future that is incredibly good.  Beginning about 740 B.C., He began to download into His prophets amazingly detailed descriptions of how the Kingdom of His Messiah would unfold on earth.  Messianic Jews have been much more aware of these prophecies than we Gentiles are, who tend to spiritualize these prophecies.  But recently a few Christian leaders like Mike Bickle at the Kansas City International House of Prayer, have been teaching the original teaching of the Church when we were more in touch with our Jewish roots.  This view of End Time promise is called is called “Historic Premillennialism,” to distinguish it from all the other creative ideas Christians have come up with over the last fifteen hundred years.  My goal in this teaching will be to make a case for the original teaching on this subject by the Apostles and the Apostolic Fathers of the Church (first three centuries). So in the next few months, you can start looking for the first few uploads on that next series.

In May, we joined together with the Williamsburg house of prayer to do a prayer seminar together.  Ryan and Jade McAdams hosted us at their facility, and we had a wonderful time together.  Now we have a second joint seminar, July 19, from 9 a.m. to 1 p.m., including lunch.  We will look at the “authority of prayer in Jesus’ name.”  If you are in our area, and you haver a heart for prayer, we invite you to come and try us out here at The Clearing.  Questions?  Cal 804-347-3303 or 347-3306.

This entry was posted on Tuesday, July 1st, 2014 at 11:25 am and is filed under General News. You can follow any responses to this entry through the RSS 2.0 feed. You can leave a response, or trackback from your own site.