Long Range Plans Our Vision Wellness Board of Directors

When Carla and I first got our calling to pray for a spiritual awakening (back in 1983), B

ill Bright was still alive, Mike Bickle was a Presbyterian youth pastor, and almost no one was praying for “revival.” How things have changed, for the good. In 1993, ten years after that beginning, God allocated to us one burden out of the overall assignment of “spiritual awakening”: to intercede for Native tribes. This calling has become for us a deep and permanent one.

Eleven years later, in 2004, God gave us a prophetic word: “You are Simeon, and you will see with your own eyes the answer to your many prayers.” He gave us this word twice that year, once in Richmond, and a second time two months later in Kansas City. Part of the joy of this intercessory calling is to see not only how God answers prayer, but how He contrives to show us the answer when it comes. “…You will see with your own eyes…” That way, we would not just keep praying out of sheer duty, but because we are in a dynamic relationship with the One who controls history. We shape history with our prayers.

This year we have seen with our own eyes more of His answers than any other single year since we began. Here are two:

A year ago, while attending the Chickahominy pow-wow, I was led to begin praying that this annual pow-wow would become a venue for the light of Jesus–that dancers would experience the love of Jesus as they danced in the pow-wow. I believe the Virginia tribes could actually gain a reputation for this throughout the country among the other tribes. “Virginia pow-wows—that’s where Jesus shows up.” 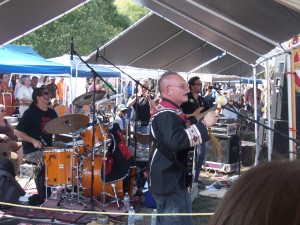 Broken Walls at the Pow-wow

This summer, Troy Adkins, one of our prayer group members, began making arrangements for Jonathan Maracle and his Christian band, Broken Walls, to minister at the 2010 pow-wow. We had introduced Troy to this band in 2000, and Troy and his wife, Kelly, have sometimes traveled with Jonathan on ministry tours since then. But the Chickahominy venue, I learned, was unique: it was the first time Broken Walls was ever invited to minister during a pow-wow. Normally, pow-wows and Christianity don’t mix. So far. 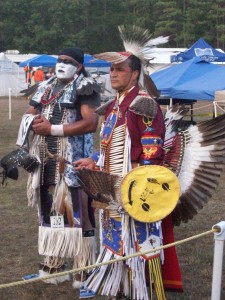 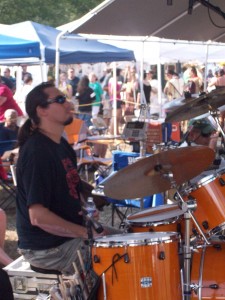 On Nov. 16, we had a surprise visitor to our Tuesday prayer group. Pam Red Cloud, we learned, is a Lakota woman descended from three of the greatest chiefs of her nation: Red Cloud, Crazy Horse, and Big Foot. If you have read Bury My Heart At Wounded Knee, you will recognize all three names. I have a picture of Chief Red Cloud on the wall of our prayer room. And Pam has a ministry at Pine Ridge called “Red Cloud Vision.”
But, like so many Native peoples, there is at Pine Ridge widespread poverty and desperation. Not only that; Catholic residential schools have made the gospel so distasteful that the name of Jesus has become profoundly unwelcome on the rez. So now, the most likely place Native people might find hope is the last place they will look for it. Jesus.
And this was Pam’s experience until three weeks ago, 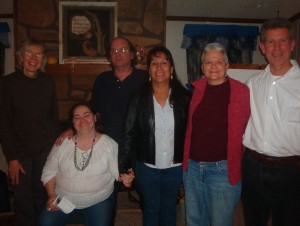 when our friends the Baisleys invited Pam to take the “Ancient Paths” course here in Virginia. And behold! A spiritual awakening! Pam writes: “I didn’t realize the impact of what the Catholic boarding schools had done to my understanding of Yeshua. The past abuse just came flooding in, and then I realized what that was really about was actually a scary thing! But then…I truly was able to forgive, so everything has its purpose in the Creator’s world. I am so grateful He put such loving relatives as all of you in my life.”
I feel sure we will see Pam Red Cloud again here at The Clearing. What joy!–to see God do this deep inner work of awakening, and then we get a new sister in Christ as a result.

These are just two stories of many we could share, as we see a lifetime of prayer suddenly bearing fruit. If you are interested in knowing how these adventures turn out, why not subscribe to our blog at www.TheClearing.us. We are trying to become computerized, and you could help us that way.

Also, we continue to rely on people’s gifts to develop the property out here at The Clearing. We ask that people send contributions to our friend, Eric Samuelson, at The Timothy Project, which works well for us as a 501c3. It helps to keep us financially accountable, and you will receive a donation receipt for Uncle Sam after year’s end.

This entry was posted on Thursday, December 9th, 2010 at 9:26 pm and is filed under General News, Uncategorized. You can follow any responses to this entry through the RSS 2.0 feed. You can leave a response, or trackback from your own site.